Orchis belongs to the botanical genus of flowering plants called Orchidaceae. This family of plants includes a variety of colorful and fragrant flowers which is commonly called as Orchid family. Such flowering plants are native to Tibet, Europe, Mongolia, northwestern Africa, and Xinjiang.

The botanical name Orchis is derived from the ancient Greek word ὄρχις, meaning “testicle“. That is, the Orchis plant got its name because it resembles the shape of two connected submersible tubes.

Root tubers are found instead of pseudobulbs in orchid plants that can grow in fertile terrain. The pseudobulb is a storage organ made up of certain components such as the internode, heteroblastic, and homoblastic found between the leaf tips. But root tuber is a type of tuber stored in rhizomes.

The appearance of these plants with erect and tubular stems is unique and completely different from other plants. The flowers, which appear in clusters or groups are known inflorescences, and the inflorescence has the shape of cylindrical to globose spike.

The red, purple, and yellow color flowers appear on the surface of the inflorescence, which are 2 to 6 inches long. All flowers of the genus Orchis begin to bloom at the base of the plant, except for the flowers of the Monkey Orchid, which has the botanical name Orchis Simia.

Later they grow and progress slowly upwards, but only the flowers of the monkey orchid bloom in reverse order.

The genus Orchis, which includes more than 1,300 unique plant families, but it’s polyphyletic, so Pridgeon et al. divided this into new genera such as Ponerorchis, Schizodium, Steveniella.

Most of the neotropical orchid species that are widely grown in Northwest South America and South Central America. Such plants are widely cultivated for their attractive design, unique flowers, refreshing aroma, and specific medicinal properties.

Plants of the genus Orchis thrive in coastal areas, semi-deserts, tropical rainforests, and tundra (a type of biome). 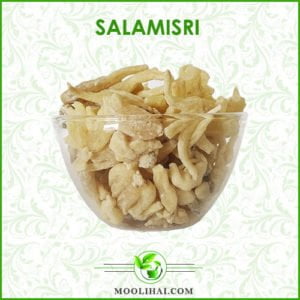 “Salab misri is actually a big powerhouse of antioxidants which gradually increases the immunity levels and helps to stay active as well as energetic. Consuming the Salab misri root powder pulls out the harmful toxins from the body and keeps you light.

Buy Salam Misri Online and attain the health benefits throughout your lifetime”.

What is Orchis Mascula? 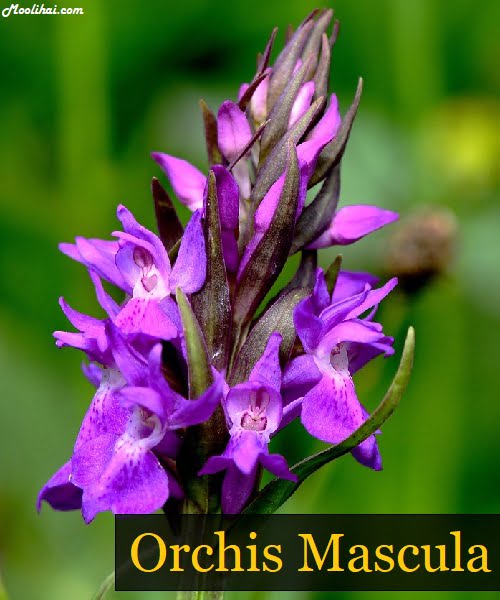 Orchis Mascula is a flowering plant which belongs to the genus Orchidaceae, the blooming begins especially in early spring (April to August). But O. Mascula, which can be grown in the forests of Western countries, blooms from mid-April to mid-June.

This perennial herbaceous plant, about 50-60 cm tall, has green stems at the base and purple flowers on the upper tip. They are native to North Asia, the Middle East, Europe, Turkey, northwest Africa, and the British Isles.

The elliptical-spear shaped leaves are clustered at the base of the perennial stems, which are pale green with brownish-purple spots on the surface. Flowers bloom in pinkish-purple to dark purple, up to 1 inch long.

Inflorescence axillary racemes, densely cylindrical, about 3–5 inches long, with clusters of about 6 to 20 flowers. Its lateral sepals, which include the gynostegium, are ovate-spear-shaped and erect.

These plants produce flowers with reddish-green pollen which has no nectar. You can see the sweet liquid is on the walls of the spurs. The rhizome is tubular and elliptical in shape. Orchis Mascula thrives in moist soil, fertile soils, open pastures, forests area, mountain pastures, woods, hedgehogs, and grasslands. 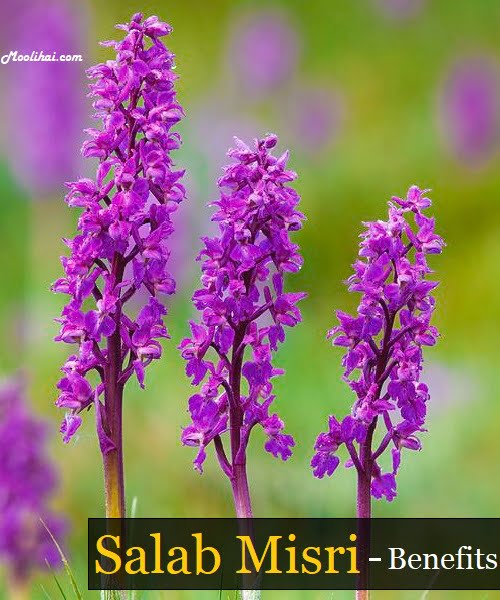 Starch has been extracted from the roots of the Orchis Mascula plant for over a century and exported for a variety of uses. Known as Salep in the US, Asia, and Europe, its starch is used in natural medicinal products to help maintain good health.

They are used in the making of wholesome and nutritious drinks in London. Besides, their fresh and dried rhizomes are used in various parts of the world to cure dangerous ailments.

According to the early Greek physician Dioscorides, married couples used Salab Misri to determine the gender of the unborn child during his period.

Abnormal functions such as the secretion of catecholamines in the systemic circulation, the discharge of excess catecholamines from the sympathetic nerve terminals to the myocardium, and the high sensitivity of norepinephrine are also important factors in neurogenic stress.

Such stress can cause different side effects in patients with other neurological disorders. The tonic made from the roots of the Salab Misri plant gives peace of mind by clearing the complex nerves.

Although libido loss is not a major problem in women, it is still seen as a major disorder in men. This is because excessive libido loss can lead to various problems in the marital relationship and also lead to psychological problems including depression, frustration, and stress.

The condition called libido loss can sometimes be caused by a single factor, or even by the overall effect of various factors. Lipid loss can also be caused by high doses of drugs, high alcohol consumption, stressful exercise, poor diet, low testosterone, and drug use.

Although Salab Misri alone is not 100% effective in controlling libido loss, studies have shown that it works effectively when mixed with various herbs.

The mixture should be crushed into soft powder and then transferred to an airtight container. Take half a teaspoon of this powder mixed with milk and drink it regularly every day to prevent libido loss and keep its level steady.

This natural and herbal product is considered the best natural remedy for curing most of the ailments related to men. According to Ayurveda Salab Misri prevents premature ejaculation and helps to prolong sexual intercourse.

Continuous intake of the recommended dose of Salab Misri not only increases the number of sperm but also makes the sperm stronger. Sperm production is greatly stimulated by the consumption of Salab Misri even in those with very low sperm count.

Factors such as Crohn disease, ulcerative colitis, irritable bowel syndrome, malabsorption syndrome, chronic infections, and indigestion of the intestine can cause chronic diarrhea.

Apart from these, bacterial infections such as Salmonella or E. coli are also important factors in causing persistent diarrhea. Persistent diarrhea causes the body to lose fluid sources quickly.

Fluid loss can lead to dehydration, if this condition persists it even leads to death. Salab Misri is very effective in treating all conditions like diarrhea, recurrent diarrhea, chronic diarrhea.

In addition, taking Salab Misri extract with hot milk regulates bowel movement. Due to this process, the digestive system is stimulated and even complex molecules are easily digested, so digestive disorders are greatly avoided.

Astringent is a chemical that normally regulates tissues, and this herbal formula, which is liquid-based, helps to remove irritants that have accumulated on the surface of the skin and improve skin tone.

Astringent in Salab Misri is very effective in treating acne caused by high oil exposure. And they are used as the main ingredient in water-based skincare products used to remove residual makeup on the face.

Regular use of Salab Misri helps to tighten skin tissues, reveals radiance in the skin, and helps to give the skin a youthful appearance.

Salab Misri is very beneficial in changing the state of mind caused by factors such as depression, fear, physical exhaustion, lethargy, reluctance, and giving the body full energy to stimulate sexual desire.

Besides, these not only significantly enlarge the size of the penis but also increase the blood flow required for the penis and give long-lasting erection and complete erection.

Ancient Ayurvedic literature stated that Salab Misri has the ability to relieve nervousness that occurs in regular drinkers and smokers. These plants also play an important role in effectively stopping the release of sperm out of control in many men during sleep.

Salab Misri helps in treating various physical problems and disorders not only for men but also for women. You can also get salab misri powder online, if not salab misri churna is available at all your doorsteps. Without a delay just make use of all those health supplements and stay energetic.

Uniquely, Salab Misri rhizomes have expectorant properties, thereby greatly avoiding respiratory disorders. An expectorant is one of the mucoactive agents, which include mucokinetics, mucoregulators, and mucolytics.

Such chemical agents help to remove mucus that stays in the trachea, upper airways, and lower airways. Through this process, the airway is cleansed and paves the way for balanced breathing.

Due to the expectorant properties of this herb, it is used to treat many problems including colds, coughs, tuberculosis, asthma, diabetes.

In a hurry? Here we have an infographics of Salab Misiri Benefits to save your time.

Salab Misri is used widely due to its anti-energetic properties which helps to solve lots of problems including cough, skin disorders, sexual health problems, and many more. According to Ayurveda, the Salam misri plant has the capability to cure even Vata and Pitta dosha.

Nowadays you can Buy salab misri online in the form of powder or capsules and live a healthy life.