Castor oil is an ancient natural remedy that has been revered for various therapeutic benefits. Castor oil is extracted from the seeds of the castor plant Ricinus communis. Castor bean is native to tropical Africa, southeastern Mediterranean Basin, India, and Eastern Africa, and it has spread through tropical and warm temperate regions globally.

It has also become an increasingly abundant weed in the southwestern U.S. The Castor plants are mostly found at the edges of the cultivated lands, in moist, well-drained soils, and in disturbed areas such as roadsides, riverbeds, and the fallow fields.

These castor seeds have been found in ancient Egyptian tombs dating back to 4000 B.C and are considered to be an important medicinal herb by many cultures. The ancient Egyptians first used this oil in wick lamps for lighting, thousands of years ago and the oil extracted from the castor beans were given to pregnant women to stimulate labor. Also, it’s believed to be a home remedy for treating eye irritation. 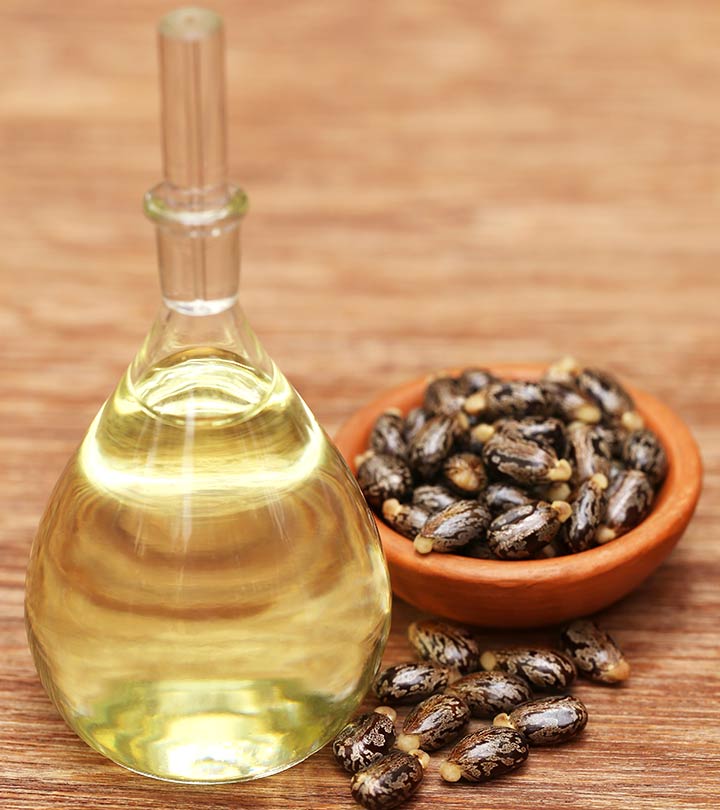 What is Castor Oil Used for?

A study by the International Journal of Toxicology has shown that castor oil is used exhaustively in more than 700 cosmetic products. It also consists of certain useful esters and salts that function as skin-conditioning agents.

Castor oil has always been a component in traditional home remedies for treating common skin problems like pigmentation and in DIY beauty care products.

This multi-purpose vegetable oil owns anti-inflammatory, antimicrobial, laxative and can be used for treating several ailments. Different types of castor oils are used in various applications. 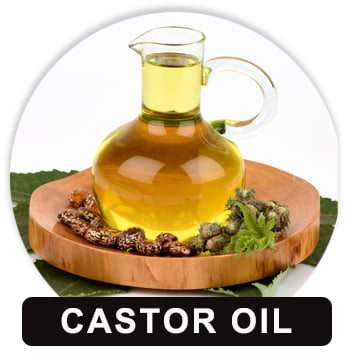 There are three significant types of castor oil that people use on their hair and skin. They are;

Manufacturers make this castor oil by cold-pressing ( heat and chemical-free) the castor beans to extract oil. Most people believe that heat-pressing the beans affects some of the oil components and lowers their healing properties.

This cold pressing releases powerful oil with all of its essential minerals, nutrients, and fatty acids intact.

It’s also known as castor wax, and is made from castor beans. This oil is waxy and brittle; also, it will not dissolve in water. It’s a common ingredient in personal care products, making soaps, detergents, and cosmetics products.

Black oil is obtained from roasted castor beans, i.e., the beans are roasted well and then pressed to release oil. 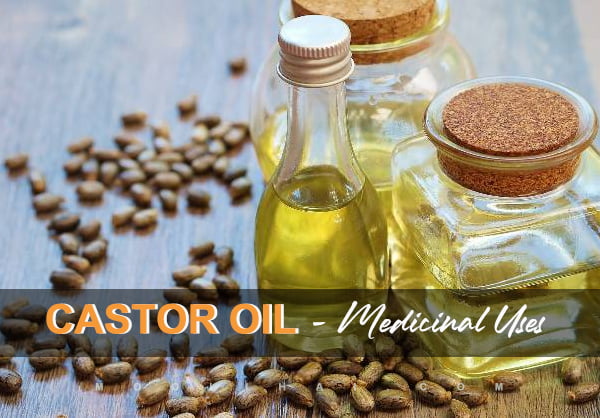 Castor oil is popularly known for its skin and hair benefits, but it also has incredibly therapeutic benefits, many of us were not aware of it. Though our elders have thought about castor oil’s goodness, most of us are only familiar with its fantastic hair and skin benefits. In addition to that, castor oil is well-known for its antibacterial properties, medicinal uses, and therapeutic advantages. Here is how castor oil is used for treating various ailments:

Castor oil acts as a powerful laxative. Researchers have found that the primary fatty acid present in castor oil is called ricinoleic acid, which binds the receptors of the muscle cells on your intestinal walls.

It causes those muscles to contract and push out the stool and thus, relieves constipation. Moreover, the heat created by castor oil initiates action by helping digestion and cleansing the system by administering proper bowel movements. Castor oil works effectively and quickly when taken orally during the day.

How to Use Castor oil for Constipation:

You can have a 15 ml dose to relieve constipation, which is equal to 3 spoons of cold-pressed oil once a day. You will experience a bowel movement 2-3 hours after taking the oil. Since it has a very strong taste, you can chill the oil a bit before consuming it to mask the flavor. Or you can also add one tablespoon of castor oil to a glass of cranberry juice or orange juice to avoid the unpleasant taste.

Taking castor oil for treating constipation may also lead to vomiting and nausea. It’s an usual side effect, but if you experience too much, stop using castor oil and visit your doctor.

Treats the Symptoms of Arthritis

Castor oil helps in reducing inflammation. The castor oil consists of ricinoleic acid that has an excellent anti-inflammatory and analgesic properties.

A study has proven that castor oil can be effectively used for treating primary knee osteoarthritis. A person with osteoarthritis has given a castor oil capsule thrice a day for four weeks, and he has shown good improvement in his symptoms.

How to Use Castor Oil for Treating Arthritis:

This ricinoleic acid has shown a significant effect on inflammation, relieving joint pains, sore muscles, indeed for those who have arthritis.

You can also use a castor pack by applying ½tsp of the oil directly to the painful area and then cover it with a heating pad or hot water bag to alleviate pain. Thus, using castor oil for treating arthritis is quite simple.

Hemorrhoids are also known as piles, which are the swollen veins in the lower rectum and anus. They are relatively common and often cause discomfort, itching, pain, irritation, and rectal bleeding.

Regular intake of castor oil can help you to get rid of constipation. Castor oil is rich in anti-fungal, anti-bacterial, and antioxidant properties, which reduces the pain owing to piles by reducing its size.

Research has also shown that castor seeds can be used for treating hemorrhoids. It can be attributed to the anti-inflammatory properties of the seeds and the oil.

How to Use Castor Oil for Treating Piles:

Take 3ml of castor oil daily with a glass of milk to treat Hemorrhoids.

Castor oil is a natural treatment for removing warts, ringworms, dandruff, as it has anti-microbial and anti-inflammatory properties. Anecdotal evidence also suggests that the topical application of castor oil to the wart every day may help it fall off.

Apply castor oil to the wart every day, and you can also use a cotton ball soaked in castor oil or a thin slice of garlic and tape it over the wart. Next morning, rub the dead skin away with a pumice stone. After a few days, the wart will become dark, and it might take two or more weeks for the wart to fall off.

Psoriasis is an inflammatory condition, and castor oil may potentially help alleviate its symptoms and reduce flares. Castor oil can fight against candida, a fungal infection, and aids in the treatment of melasma, a condition that leaves brown patches on the face.

A study has shown that the phenol- castor oil may reduce pigments in a severe melasma case.

How to Use Castor Oil for Psoriasis:

You can topically apply the oil with some cotton wool to the affected areas before going to bed. Let it get absorbed overnight, rinse it off the next morning, and gently pat the skin to dry. Hence, this home remedy could help with psoriasis.

Castor oil has been suggested as one of the folklore methods for inducing labor. Castor has good labor-inducing properties and is also best known as a laxative. The castor oil causes spasms in the intestine, which stimulates the bowels and vagal nerves. Both irritate the uterus and make it contract.

Castor oil works very quickly within two-six hours after ingesting it. A study published by Alternative Therapies of Health and Medicine has shown that taking castor oil is more probable to go into labor within 24 hours. Another study also reveals that castor oil is a safe non-pharmacological method for labor induction.

Also, it helps in inducing labor in post-date multiparous women. Another study describes that there’s no induction of labor posts with the use of castor oil.

Also, it reports that there was no harm to either mother or the baby. Castor oil can be very effective at the beginning of labor, but it may cause some irregular and painful contractions that could be stressful to baby and mom alike. It can also lead to exhaustion.

It may cause your baby to pass meconium or their first stool before delivery, leading to problems after birth.

Hence, inducing labor is a health medical decision that is made safe for both mom and baby. It’s recommended to take during the late-term of pregnancy. It’s necessary to consult your doctor first because each pregnancy is different. If their response is yes, you can use it as they direct you.

How to Take Castor Oil for Labor:

Take 60ml, which is about four tablespoons of castor oil, and mix it with orange juice to mask the taste. It’s better to take it in the daytime so that you can observe your symptoms. Drink lots of water so that you won’t need to be awake in the bathroom all night.

Fibroids are tumors, which are developed in the uterus. The fibroids are in the range of tiny seedlings, which are undetectable by the human eyes. They are non-cancerous and benign. Castor oil is one of the folk remedies for treating cysts and fibroids. Moreover, a castor oil pack is the best home remedy to treat and prevent fibroids.

Castor oil is excellent for treating arthritis due to the high triglyceride content, consisting of ricinoleic acid in it. The Anti-inflammatory properties make it an ideal massage oil for relieving sore muscles, joint pain, nerve, and inflammation. A gentle massage in the joint with castor oil and placing a hot water bag over it helps to relieve pain. In arthritis cases, if this process is repeated twice a week, it will give you better results.

How to Use Castor Oil for Treating Joint Pains:

Castor oil has been used as a traditional medicine and as a food supplement for thousands of years. Various medicinal properties of castor beans can be attributed to their unsaturated fatty acids. It has various benefits from treating digestive issues to treating skin and hair issues. Though, more study is needed to know the above claims in detail.

Intaking castor oil is possibly safe when it’s consumed in limited amounts. Excessive amounts of castor oil may lead to harmful side effects. So it’s suggested to take it in limited quantities and consult your doctor immediately if you notice any side effects after consumption.